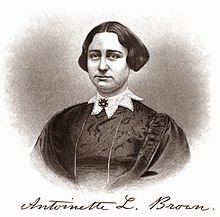 Blackwell chose to highlight balance and cooperation rather than
struggle and savage rivalry.

Antoinette Blackwell was both an Evolutionist and a Creationist ! She
was the first woman ordained as a Christian minister in the US , and
she wrote a General Science textbook agreeing with Charles Darwin's
theory of the evolution of species by natural selection. What an
interesting historical character in light of today's debates between
Creationists and Evolutionists !

Mother Blackwell was also a suffragette. In 1920, at age 95, she was
the only participant of the 1850 Women's Rights Convention in
Worcester, Massachusetts who lived long enough to vote when at last
women had the vote, dammit.

Reverend Blackwell was also an abolitionist against slavery. She was
one of the few white feminists to support the 15th Amendment giving
the vote to Black men, even as no women had the vote. She supported
the famous African American leader, Frederick Douglass, in this debate
within American feminism in the mid-1900's.

A regular Force of Nature was she.


I came across Blackwell in reading about Charles Darwin's book  The
Descent of Man, and Selection in Relation to Sex.  Antoinette
Blackwell wrote The Sexes Throughout Nature.  I haven't actually read
those books yet, but I have them on order. Future blogs will explore
the issues in those books more.

Meanwhile, Wikipedia's items explains how Blackwell argued that there
was natural selection for "cooperation and balance" among humans, all
of us members of the same species.  Survival of the fittest does not
mean survival of competition between humans, survival of the toughest
individual "men".  The fittest are those who successfully reproduce !
Reproduction requires , in the first place, cooperation (smiles).

On the primacy of cooperation in natural origins , See Labor Power's

Is Human Nature Social or Selfish ?


Antoinette Blackwell's book, The Sexes Throughout Nature,  critiques
Charles Darwin four years after he published The Descent of Man, and
Selection in Relation to Sex in 1871,[1] and Herbert Spencer, whom the
author thought were the most influential men of her day.[2] Darwin had
written a letter to her in 1869, thanking her for a copy of her book,
Studies in General Science.[3] She also answers Dr. E. H. Clarke and
his book Sex and Education which she deplored.[4] Blackwell's book was
republished by Hyperion Press in 1976, 1985 and 1992.[5] Parts of the
book were first published in Woman's Journal and Popular Science
Monthly.[6]
Blackwell chose to highlight balance and cooperation rather than
struggle and savage rivalry. She criticized Darwin for basing his
theory of evolution on "time-honored assumption that the male is the
normal type of his species".[7] She wrote that Spencer scientifically
subtracts from the female and Darwin as scientifically adds to the
male.[6]

Darwin's theories of evolution by natural selection were used to show
women's place in society was the result of nature.[14] One of the
first women to critique Darwin, Antoinette Brown Blackwell published
The Sexes Throughout Nature in 1875.[15] She was aware she would be
considered presumptuous for criticising evolutionary theory but wrote
that "disadvantages under which we [women] are placed...will never be
lessened by waiting".[16] Blackwell's book answered Darwin and Herbert
Spencer, who she thought were the two most influential living men.[17]
She wrote of "defrauded womanhood" and her fears that "the human race,
forever retarding its own advancement...could not recognize and
promote a genuine, broad, and healthful equilibrium of the sexes".[18]


It was not until one century later[8] that feminists were working
from inside the natural sciences, and could address Darwin's
androcentricity.[1]
Sarah Blaffer Hrdy wrote in her book Mother Nature: A History of
Mothers, Infants and Natural Selection (quoting from an excerpt of
pages 12–25 in AnthroNotes for educators published by the National
Museum of Natural History),

"For a handful of nineteenth-century women intellectuals, however,
evolutionary theory was just too important to ignore. Instead of
turning away, they stepped forward to tap Darwin and Spencer on the
shoulder to express their support for this revolutionary view of human
nature, and also to politely remind them that they had left out half
the species."[9]

Hrdy added, "Evolutionary biology did eventually respond to these
criticisms, yet in their lifetimes, the effect that these early
Darwinian feminists—Eliot, Blackwell, Royer, and a few others—had on
mainstream evolutionary theory can be summed up with one phrase: the
road not taken."[10]


In the Descent of Man, Darwin wrote that by choosing tools and weapons
over the years, "man has ultimately become superior to woman"[19] but
Blackwell's argument for women's equality went largely ignored until
the 1970s when feminist scientists and historians began to explore
Darwin.[20] As recently as 2004, Griet Vandermassen, aligned with
other Darwinian feminists of the 1990s and early 2000s (decade), wrote
that a unifying theory of human nature should include sexual
selection.[15] But then the "opposite ongoing integration" was
promoted by another faction as an alternative in 2007.[21]
Nonetheless, Darwin's explanation of sexual selection continues to
receive support from both social and biological scientists as "the
best explanation to date".[22]v

Perhaps Antoinette Blackwell's ideas are a basis for cooperation between Creationists and Evolutionists today !

America dumbs down
The U.S. is being overrun by a wave of anti-science, anti-intellectual thinking. Has the most powerful nation on Earth lost its mind?
"South Carolina’s state beverage is milk. Its insect is the praying mantis. There’s a designated dance—the shag—as well a sanctioned tartan, game bird, dog, flower, gem and snack food (boiled peanuts). But what Olivia McConnell noticed was missing from among her home’s 50 official symbols was a fossil. So last year, the eight-year-old science enthusiast wrote to the governor and her representatives to nominate the Columbian mammoth. Teeth from the woolly proboscidean, dug up by slaves on a local plantation in 1725, were among the first remains of an ancient species ever discovered in North America. Forty-three other states had already laid claim to various dinosaurs, trilobites, primitive whales and even petrified wood. It seemed like a no-brainer. “Fossils tell us about our past,” the Grade 2 student wrote.
And, as it turns out, the present, too. The bill that Olivia inspired has become the subject of considerable angst at the legislature in the state capital of Columbia. First, an objecting state senator attached three verses from Genesis to the act, outlining God’s creation of all living creatures. Then, after other lawmakers spiked the amendment as out of order for its introduction of the divinity, he took another crack, specifying that the Columbian mammoth “was created on the sixth day with the other beasts of the field.” That version passed in the senate in early April. But now the bill is back in committee as the lower house squabbles over the new language, and it’s seemingly destined for the same fate as its honouree—extinction." http://www.macleans.ca/politics/america-dumbs-down/

How Right-Wingers Are Amping Up Their War on Science and Reality
Republicans are taking their science denialism to striking new levels.
AlterNet
http://www.alternet.org/belief/how-right-wingers-are-amping-their-war-science-and-reality
Posted by cb at 7:48 AM