By CHARLES BROWN For anthropology, culture-language-Symbolic Inheritance is the unique species characteristic of
_homo sapiens_.  In a sense, "culture-language-Symbolic Inheritance is another word for "wisdom",
from the notion that humans are the species _homo  wise_.  It is
humans socially learned practices, customs, language, traditions,
beliefs, religion, spirituality that make us "wise" in so many ways,
certainly clever and winners _as a species_ ( not just as a few "fit"
Individuals) in the struggles and snuggles to survive as a species.
Since the advent of civilization, sometimes it's not so clear how wise
our culture makes us. Greed, slavery, war, male supremacy, Egoism originate with Civilization ! It is better termed Savagery and Barbarism. Therein lies the central drama of the history of
the human species.  Nonetheless, clearly in the Stone Age, our having
culture-language-Symbolic Inheritance was a highly adaptive advantage over species that did not have
culture , stone tools made according to design , scientific knowledge in the stone age (!) standing on the shoulders of dead generations , raising our species
fitness.  This is  evidenced by _homo sapiens_ expanding in population
and therefore migrating to an expanded area of living space across the
earth , out of what is now Africa to the other continents ( but not vacating Africa ) . Stone Age
foraging and  kinship organized , peaceful and sharing societies were  the mode of life for
the vast majority of time of human                    species '
existence,  99% or more. 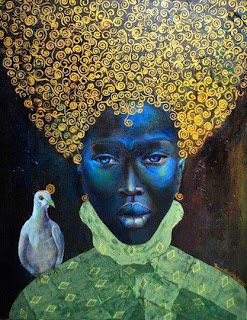